The Animal Welfare Act of 2006 imposes upon the owner of an animal a ‘duty of care’ and states that an animal has a right to five basic welfare needs, one of which is the right to behave naturally for their species. As humans we have a moral obligation to regard and treat animals appropriately and ethically.

The domesticated dog, with a common ancestor to the grey wolf, has the greatest body conformation varieties of any species due to selective breeding by humans. There are over 400 breeds worldwide with 218 recognised breeds in the UK yet they are all of the same species – canis familiaris.

Crufts is the world’s biggest dog show. Held in Birmingham’s NEC it lasts for four days in early March each year. Normally it attracts around 160,000 visitors and an estimated 4.5 million TV viewers.

Today, popular competitions at Crufts include: agility, obedience, flyball, freestyle and heelwork to music. At heart though, Crufts is a conformation show. Pedigree dogs from the Kennel Club’s 218 recognised breeds are judged according to how well they conform to the breed standard. Each breed winner then competes with the other winners in their group; there being seven groups overall. The group winners then go through to the final.

The KC lists ‘correct’ characteristics: appearance, temperament, fur colour with breeders being rewarded if they match this ideal standard. A pomeranian, for example should be ‘extroverted’, with ‘intelligent’ eyes, a ‘foxy’ head and nose and a ‘buoyant’ gait, its fur free from black and white shadings. It all becomes somewhat anthropomorphic and open to interpretation. What exactly does a ‘buoyant’ gait mean and who determines what ‘intelligent’ eyes look like. It’s all subjective; do we compare these traits with, say, another dog, a human or perhaps a gorilla?

“So what?” you may ask, the animals are not treated cruelly – or are they? Concerns have been raised about dogs being bred for the ring to look a specific way, some with exaggerated characteristics such as flat faces, short legs, wrinkly skin and severe deformities. For example, the King Charles spaniel potentially suffers from syringomyelia, an agonising condition caused by a dogs brain being too big for its skull; pugs and French bulldogs with breathing problems; and bull dogs that are unable to mate, or give birth unassisted. These and other problems were highlighted in a 2008 BBC documentary, Pedigree Dogs Exposed, and accused the KC of allowing breeding, particularly inbreeding, according to breed standards with little or no regard to the dogs’ long term health and welfare. The then RSPCAs chief vet stated, “When I watch Crufts what I see in front of me is a parade of mutants”. The BBC later dropped Crufts as a result, as did a number of sponsors, including the RSPCA, The Dogs Trust and Pedigree Petfoods.

There is now a much greater awareness of the dangers of inbreeding and selecting for extremes. The KC reviewed its breed standards after the documentary, changing at least 70, and has raised awareness of health conditions linked to inbreeding and ‘exaggerated conformation’. It banned first-degree-relative matings: i.e.father-daughter, or sibling to sibling; surprisingly, it had not done so until then. It has also invested in scientific studies and genetic tests. There now appears to be a swing towards moderation in some of the worst breeds but we, humans, have a lot to answer for and these ‘deformed’ breeds are still in proliferation. For example inbreeding is still rife. The KC still allows grandfather-granddaughter and cousin-cousin matings but, ironically, does not recognise crossbreeds such as labradoodles! Where once the breed standard demanded that bulldogs have a ‘massive’ head, today they are still meant to be ‘relatively’ large. Crufts still, at times, seems tolerant of health defects: in 2016, Tori, a German shepherd with a back so sloped that it impeded her leg movement, won best in breed. Breeding for the ring still raises serious animal welfare and moral issues.

Is being paraded in a ring on a short leash, in an alien environment, a natural behaviour for our pet dogs? We can only search our conscience!

An example of animal treatment in the UK in 2020! 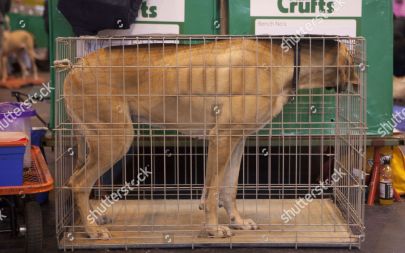 2 thoughts on “Crufts: The Greatest Show on Earth or animal exploitation?”